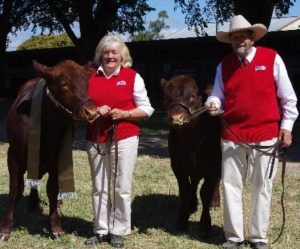 Sophronites Red Poll Stud is situated in Pheasant Creek, Victoria, a small community near Whittlesea, about 50 kms north of Melbourne. The stud has been in operation since 1989, and has strong female lines derived from the former Penola Plains Stud from South Australia. It is now blended with the famous Red Cactus lines of Arthurs Creek (Vic), and with lines from Pentwyn Vale (SA), Broomfield, Yongerellen (WA) and Oakwood Studs (SA), and the Heathray Stud of New South Wales.

The name Sophronites is derived from the name of a dark red tropical orchid, and this reflects Ian’s botanical interests. Having retired from Academic life at LaTrobe University in 1996, Ian, along with Nell, who retired from Teaching also in 1996, have dedicated their time in establishing a herd that is capable of producing what the Beef Industry requires and also, with the same animals, competing in Shows where their performance and structure are judged competitively against their peers.  They also use an occasional steer for their own consumption.

Our showing campaign has been successful from the outset, as we won awards for Junior Champion Heifer and Reserve Champion Senior Cow at the Melbourne RAS of 1997 at our very first show, and have subsequently gained Championships at Sydney Royal Easter Show, Royal Canberra Show, and Royal Melbourne Show. The highlight for our Stud was the winning of Grand Champion Bull at the Adelaide Red Poll Feature Show in 2001 under American Judge Dr. Ted Turner. The winning bull, Sophronites Merlin, became the major sire in our herd. He has now sired both the Grand Champion Red Poll Bull – Zulu, and the Grand Champion and Supreme Champion Red Poll Female – Natalie, at Royal Canberra Show in 2006 also winning the Sires Progeny Group at Canberra 2006. (We have semen available for sale from our major bulls – Merlin, Zulu, Nimrod, and Anzac – each having individual excellent but slightly different features).

Our breeding program now involves the use of artificial insemination and embryo transfer as well as conventional breeding methods. As well as selling our steers on the commercial market, our bulls have been used commercially in Crossbreeding enterprises with Murray Greys, Herefords, Ayrshires, and Angus and are also being used in Stud and commercial Red Poll Herds in Victoria, NSW and Queensland. We have actively supported Red Poll Sales including Sales at Mernda, Victoria, at Lismore and Glen Innes, NSW and at Whittlesea and Euria, Victoria. At some of these sales, we have achieved the highest price for a Red Poll.

Nell and Ian have both supported the Red Poll Breed by holding offices in the Victorian Region such as Publicity Officer and Secretary (2007-2019), and Ian was a member of the National Executive of the Australian Red Poll Cattle Breeders Incorporated for four years.  We have also contributed to Red Poll promotion by attending the Red Poll sites at Elmore Field Days, Farm World at Lardner Park and Sungold Field Days.

Our Stud has had MN2 Status in the Johnes Monitored Accreditation Program and we have tested many of our stock using Genestar DNA technology to assist in our selection process.

We have also participated in all the On Farm Challenges held since 2008 with distinction as well as being involved in the organization and running of these events.

In 2007, we added to our farm by purchasing a 180 acre farm in Colbinabbin adjoining a property owned by Lesley and Alan Johns who managed their Rhyd-Talog Red Poll herd.  We gained a large amount of good advice and friendship from them –  Lesley  on the breeding side and Alan on the area of farm machinery and management.  This provided a great site for our Red Polls, especially over Winter, as the climate was much warmer than that at Pheasant Creek.  The tyranny of distance (150 km each way from Pheasant Creek) led us to sell the northern property in 2014.

In 2009, our farm including home, sheds and fencing were devastated by the Black Saturday Fire, but our cattle all survived and we were able to feed and water them with kind assistance from neighbours, and other helpful people from near and afar.